On March 28, 2017, a retirement tea was held for Imelda Canonizado, a long-term employee at Three Links.

Imelda started at Three Links Care Centre on December 20, 1988 as a Resident Care Aide. She had just completed her courses in the Residential Care Aide program at Douglas College and decided to start looking for work before graduation. One day, on the employment board at Douglas College, she saw a notice that Three Links Care Centre was looking for Care Aides. Unfamiliar with the Renfrew-Collingwood neighbourhood, she asked a family member living in the area to show her where the Care Centre was located and she asked her friend (who was currently working at Three Links) for input and advice.

Her friend advised her that Three Links is a nice place to work – at the time, the Care Centre was a 75-bed intermediate care facility. The residents living at Three Links were still somewhat self-sufficient and only a few of them required the use of wheelchairs and walkers.  Imelda decided that Three Links would be the perfect first job out of school for her and she sent in her application – she was hired almost immediately.

Starting out as a casual, she quickly picked up enough shifts to post into a temporary part time line in 2 years and in another 2 years, Imelda acquired a regular line.

Imelda didn’t expect to be working at Three Links for very long, but she quickly fell in love with the workplace culture and interacting with the residents. She recalled the many special events that were held at the Care Centre – staff parties, potlucks, but especially the Family Nights, where she would be dancing with the residents. She also enjoyed escorting the residents on the many bus outings to local attractions like Stanley Park. She remarked that she has seen significant changes the care needs of residents during her time at Three Links. Residents back then were more mobile, but now, most of them are either in a wheelchair or walker.

Even through the significant staffing changes in 2004 where her position was contracted out, Imelda did not want to leave Three Links. After so many years at Three Links, she had become familiar with the staff and residents – they were like family to her. She decided to transfer to the Support Services Department and became a Dietary Aide to remain a part of Three Links and to continue to service the residents.  It was her intention that she would retire at Three Links.

When not working, Imelda likes to spend time with her family and friends and exercise. She attends a regular Zumba class at her local community centre, and when the weather is nice, she walks the track at St. Thomas More Collegiate.

When asked what she would miss most about Three Links after her retirement, she responded, “the staff, the residents and the parties. I love working at Three Links and can’t think of a better place to work.”

Best of luck to you, Imelda! You will be missed. 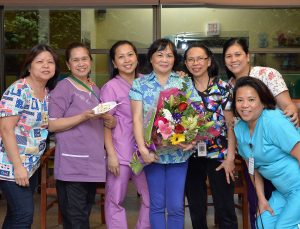