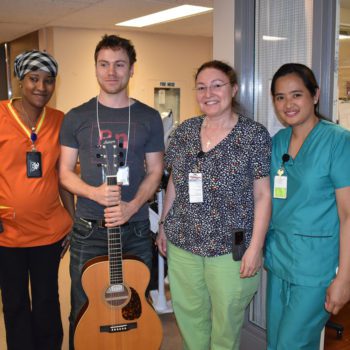 “As long as I enjoy it I’ll keep doing it.” As someone who was once a prospective medical student, volunteering to log hours on an application, James Topham is now free from the pressure of needing to do it, and you can feel it. He enjoys playing guitar for the residents, and that’s the reason he’s done it for over a year and a half now, and why he keeps on doing it. James actively searched out his role at Three Links, and due to his initiative the position was created specifically for him. To be fair, the idea came from a position he held at another care home in a similar role, playing guitar for their residents, but the effort remains. And James is no stranger to putting in the effort. While working towards medical school, he shifted gears and instead went into research, doing his Master’s degree at the BC Cancer Agency, where he now works as a research scientist. But not before spending his time gaining quite a wealth of volunteer experience. Besides Three Links, his impressive resume includes spending time with hospital patients, going for one on one walks with seniors, and teaching guitar to incarcerated youth in a prison – including during lockdowns while the residents there attempted to check out early! So, does he get many requests for songs from Three Links residents? Surprisingly, no! He insists that most of what he chooses to play is tailored to them, songs they might remember, or those that are soothing and help them sleep – which, apparently, they do. But they also appreciate the time he takes to play for them, so hopefully, he’ll keep on enjoying it just as much as they do.